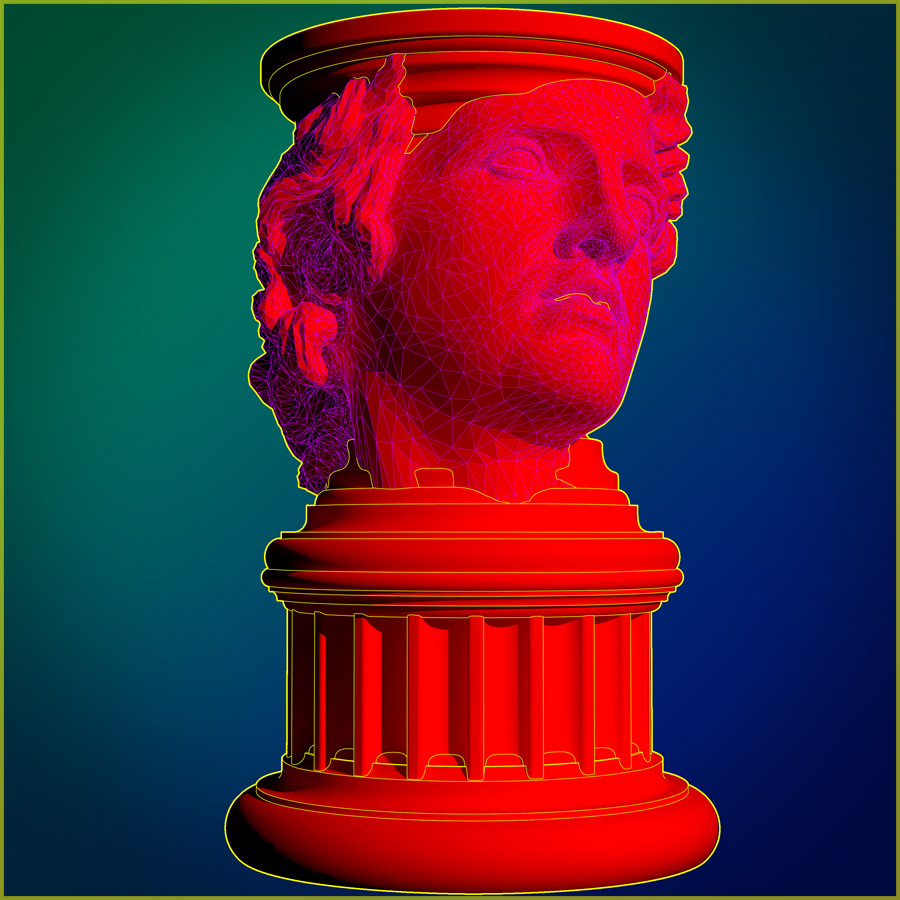 
His family tree goes as far back as the devotional statuary of domestic atriums in Babylon and Thebes, made of wood with flecks of azurite and gold leaf, figures that would take excursions across the Mediterranean on unsteady boats, to Carthage and Tripoli where they were sold or swapped for clay vessels, full of fermented fish or the colour purple.

At some point a notion coalesced around these forebears. A conceit in which each one of them was an ultimately doomed, but nonetheless worthy attempt in miniature to reflect one aspect of an impossibly pure ideal. It was 'Beauty' that his forebears never managed to encapsulate, but regardless of this failure they were all so very, very beautiful.

The first marble members of his family cast midsummer shadows in the great colonnades at Palmyra, Apamea and Leptis magna, before they were reproduced, like for like, multiplied endlessly, and spread across identical marble forums from Saguntum to Artaxata. They stood like mirrors reflecting the sun off their blinding whiteness, endless duplications of themselves in an ultimate homage to the skill of the stonemason’s hand, so much harder to achieve than the caprices of novelty.

After the fall, one of this innumerable number eventually found themselves a lone survivor, unearthed from a pile of rubble somewhere and propped up in a Vatican garden to be lauded, worshipped, studied and adored as if he himself were the direct personification of all that beauty could ever be, and had ever been. The sculptor’s duplicate was so perfect in its fate that it usurped all its predecessors from which it had once been reproduced.

Slowly at first, one souvenir at a time, he began to multiply. Smaller versions, bronze versions, porcelain versions, eventually plastic versions of him in all sizes and varying levels of verisimilitude started to appear, initially all around the city he had found himself in, and then later elsewhere, in other cities, in other countries, all over the world, in living rooms, mantelpieces, on coffee tables, desks, windowsills and display cabinets.

At some point a notion coalesced around this particular forebear. A conceit in which his burgeoning progeny were all ultimately futile, and fundamentally worthless attempts in miniature to capture the qualities embodied in his original, authentic form. But nobody explained this to him, nor to his children, and while they may not have been exactly him, they were still so very, very beautiful to all those people who bought them, to their children and their parents, and to him. 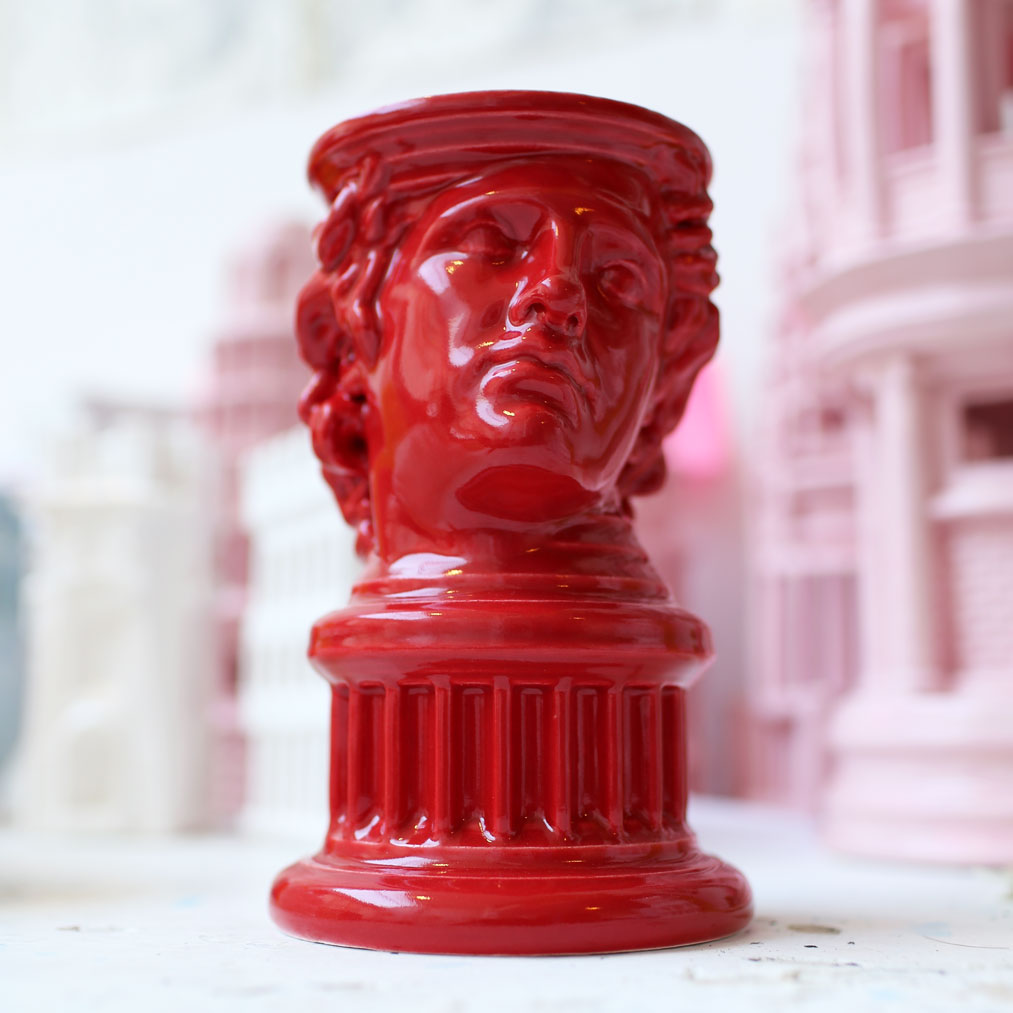 In photographs, black and white and colour and polaroid, Kodak and Fuji, and then digital bits and bytes the family grew into a nation. In colour, in photo albums, animated, through memes, on blogs, spread not only around the world’s living rooms but into every single person’s pocket, backlit, bright, photoshopped, zoomable, editable. In 3d. Poly-mesh surfaces which you could cut and stretch, and that were just like real marble. Apps in which you could make the nose bigger, bulk up the abs, rotate the head and then shoot it off to Amazon to print, for a package to arrive in three days with your very own idea of beauty in a little ball of bubble wrap.

A notion soon formed that every single member of the family was worth as much as any other, as much as the ones who came before, and as much as the ones who would come after, and as much as those others who were printed, cast, carved, painted, rendered, and drawn at the same time. There was no such thing as an Ideal, and there never had been an Original. Beauty was simply the sum total of the pleasure experienced from all these innumerable items, and so the more of them there were, the more Beauty there was.

And so out they popped, fluorescent modified babies, in plastic and stone and metal and ceramic, each one slightly different, printed everywhere from Busan to Bilbao, and no longer trying to look as much as possible like that lonely statue in a Vatican garden. Each new object in fact trying to look as different as possible whilst still nonetheless containing the instantly recognisable trace of its origins.

Beauty increased exponentially, an unprecedented escalation of gorgeousness, and with every stage of explosive growth the prestige of their ancestors surged proportionately. The larger the family, the more collectively revered the progenitors. Gods don’t exist without believers, and the more believers there are, the greater the god, and so it is in the realm of objects.

It was at this point he woke up, proud heir to a lineage as august as any of the great aristocratic families. Pasquale. A bright, deep, luscious red. Electrically so. He is cold to the touch, and as someone comes over and flicks his side with a finger, he rings like a wine glass. 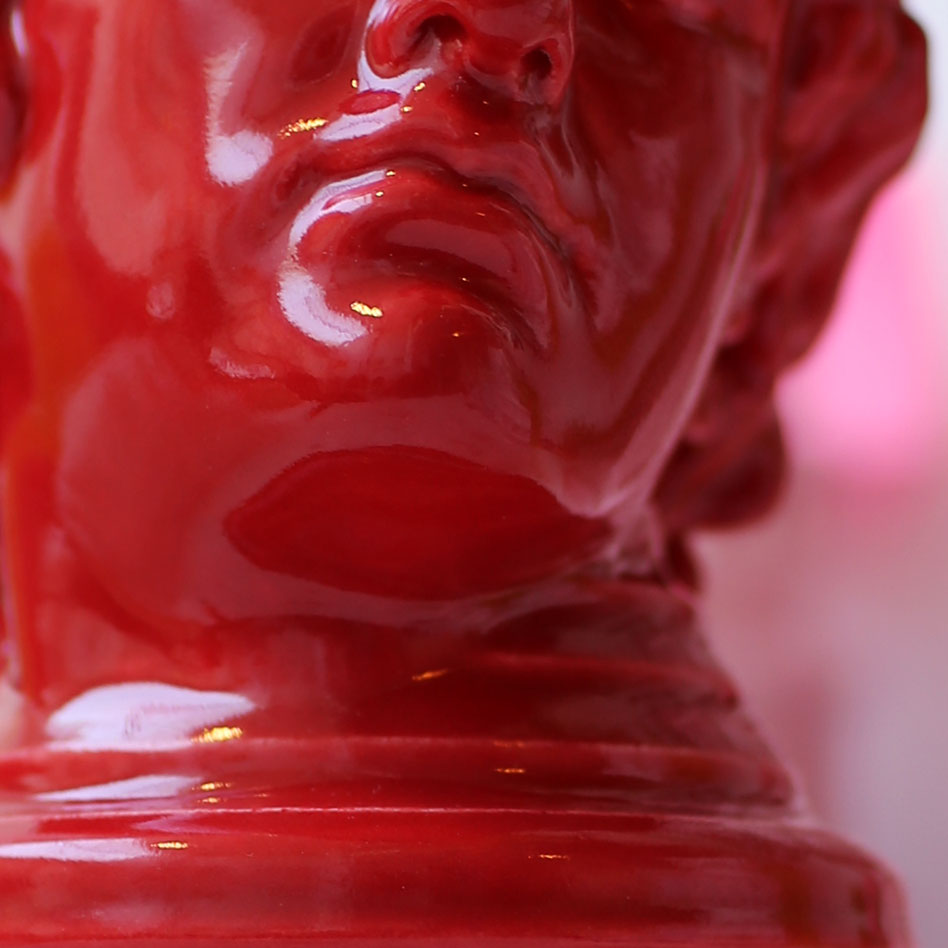 He is unique, this Pasquale, and new, so shiny, shiny new, and yet he is enriched by the depths of a past he has inherited and of the breadth of a present his kind have conquered, of features he sports which speak not only of a Renaissance Garden and its star attraction, but of a hundred thousand display cabinets, a million Instagram accounts, the marble remains of a hundred Roman cities, the precise hands of a Greek sculptor, the pages of five hundred years of artist’s sketchbooks, the molten metal of the bronze caster, the click of a Canon’s shutter, and the mechanical whining of a 3d-printer.

Pasquale knows all of this. It is why he looks so serene.

This story refers to the Apollo Belvedere in the Vatican Museums, his predecessors, and his many replicas.

Posted by Adam Nathaniel Furman at 12:59