This is the blog-site for Adam Nathaniel Furman's UK Rome for Architecture 2014-2015 project "The Roman Singularity", summary below. 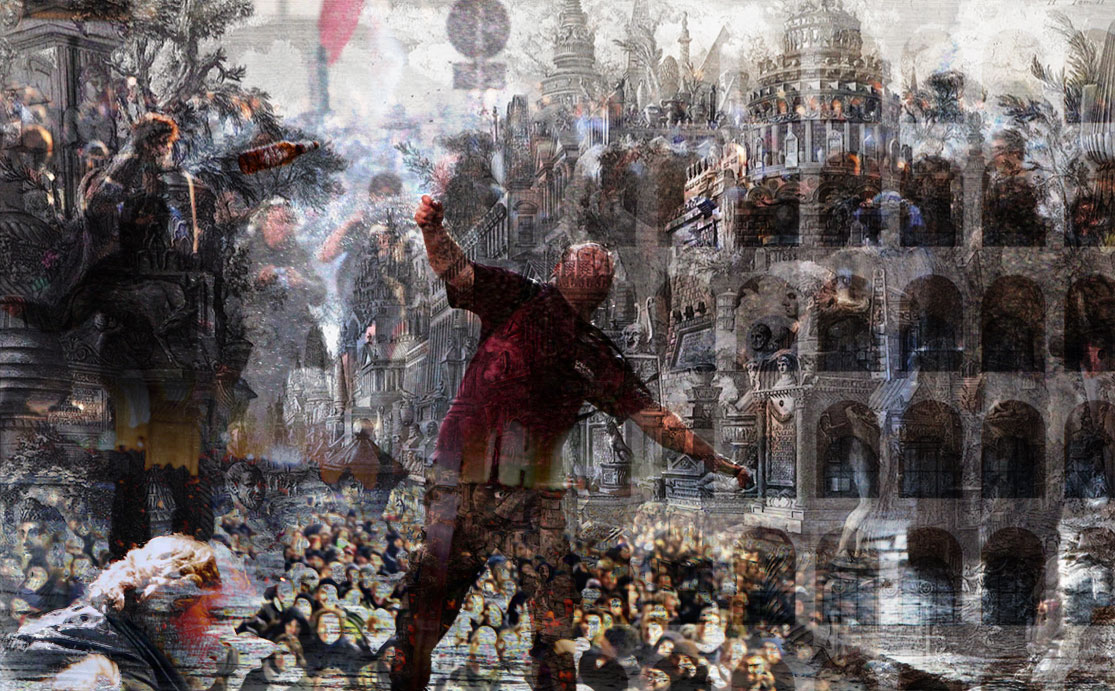 The Roman Singularity is a multi-media exploration in text, computer drawing, animation, film, hand drawing, and ceramic, creating an imaginary alternate Rome for the 21st Century; a dream in the mode of Piranesi’s Ichnographiam Campi Martii, a peek out through the other side of Rome’s catastrophic and utterly incomparable reality-bending gravitational field, a new city from which fragments in ceramic, film, and a series of capriccios were made and exhibited at the British School at Rome in March of 2015, and can be seen on this site.

Rome is a rich palimpsest of masterpieces, their remains, ruins, and re-appropriated fragments from innumerable historical periods since the Roman Republic, a veritable collection of epochs turned out to the visitor like so many household items displayed on the tables of a jumble sale. But Rome is also a crucible of modernity, a repository for possible futures precisely because it is and has been the seat of so much power, so many dreams which together with the authority of its past almost force it to be perpetually radical about the present. Every era marks the city with its greatness and its mediocrity, with projects built and proposed, ideas acted on and entertained, imaginations great and petty, collectively adding to the impossibly vast pile of history, and so forcing the city to wear it ever more lightly as time passes lest it suffocate beneath its weight. Ancient imperial forms host gay night clubs; renaissance palaces form backdrops to Berlusconi, Ruby Rubacuori, Matteo Renzi and Beppe Grillo; all the laundered money in the greatest and grandest church in the world cannot placate the South American poverty pontiff as he tweets to the world; graduates with three degrees huddle in call centres off the raccordo anulare imagining they are in Virzi’s ‘Tutta La Vita Davanti’; Borromini walks down the via Giulia with Pasolini’s Mamma Roma discussing the influx of Korean businessman, whilst Sorrentino’s Jep Gambardella parties with Raphael under some faded grotesques in a building owned by collapsing Monte dei Paschi di Siena, then over in EUR Fuksas’ PR agent waxes lyrical to Gabriele D’annunzio’s ghost about how the new convention centre is really a sign of Italian cultural superiority, and at the Corviale Marinetti is screaming at the sky that all the peasant countryside must be chewed up by steel and concrete, that this is not enough, but then Moretti’s great grandchildren are huddled around a fireplace off the Via Appia listening to a podcast of Moravia’s La Noia in a house designed by Libera, and quietly looking forward to their dinner of amatriciana and suppli al telefono.


The Roman Singularity explores and celebrates Rome as the contemporary city par-excellence, an urban version of the internet, in which subjective experience merges with an abundant profusion of historical artifacts. It is a place where the analogical-whole history of society, architecture, politics, literature and art coalesce into a space so intense and delimited that they collapse under the enormity of their own mass into a singularity of human endeavour, in which time is suspended as a dimension and everything is simultaneous, coextensive, feeding off of everything else in a city-scale feast of endlessly creative auto-cannibalism. This blog documents an exploration of emblematic case studies, and fictive investigations, as well as drawings, writings, research and digressions, and at each point of discovery architectures have been designed that evolve within the upended logic and transgressive physics of La Singolarità di Roma. The project concludes with an uncovered ‘city of singularity’ in ceramics, and an Architectural Film-Poem that encapsulates a fraction, a sectional slice through one part of the Roman Singularity, of specific narratives and contexts implied in its streets, telling their tales and revealing their forms in a cabaret of tectonic denouement.


N.B, this project is not an academic research endeavour, but a non-commercial design project that approaches facts and history in a creative spirit, and the project's writings are as much imaginative constructions veering between real and imagined, speculation and fact, as its drawings. The film contains found footage and is made in the same spirit as the rest of the project.