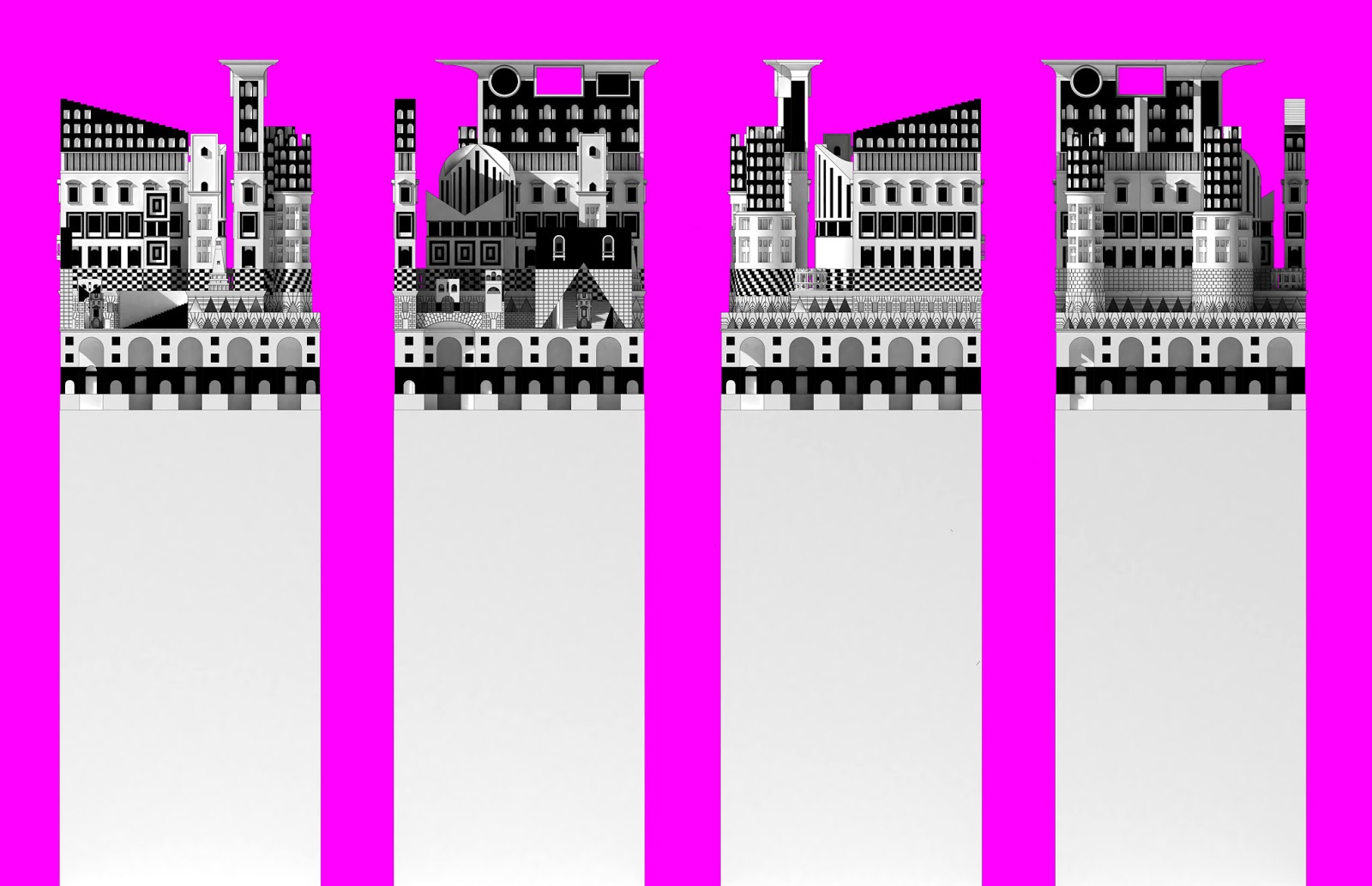 "If (as the philosophers maintain) the city is like some large house, and the house is in turn like some small city, cannot the various parts of the house - atria, xysti, dining rooms, porticoes, and so on - be considered miniature buildings?"


Over time countries build themselves a city which embodies the nation’s hopes, principles and aspirations, as well as its idiosyncrasies, foibles and delusions. Newly built on virgin land flooded with bright new futures, or the careful rehabilitation of ancient sites to discover a perfect point in an heroic past, even the retroactive invention of a history that never really existed but could nonetheless be newly built, the form a capital takes illustrates both how a people would like to imagine themselves, and how the collective imagination when invested with power can fashion whole worlds.


Over time cities themselves raise buildings which on the one hand serve to contain the machinery of civic bureaucracy, and on the other encapsulate the very nature of the town, the priorities of its citizens and the tastes of its residents. An agora, a civic plaza, a public/private mall, an administrative district, a cultural quarter, a business-park style campus, whichever of these comes to be the representative heart of the metropolis reveals itself as a fragment, from which you can reconstruct the whole conurbation as its inhabitants would ideally have it be.

Over time we accumulate around ourselves objects that either mark a moment In our lives, embodying a significant memory, or which manifest in miniature form qualities we value and strive towards. Living rooms are forums for the enumeration of individual sensibilities, dreams and achievements through the arrangement of domestically significant figurines, busts, posters, books, ceramics and toys, and mantelpieces are parliamentary squares, where domestic mythologies, founding legends, and hopes for the future are constructed in the evocative deployment of familial artefacts.

The quotidian nature of life in a country or city is almost always completely at odds with how we as inhabitants would like it to be, and with how we as a city or a nation, would like to view ourselves. It is buildings, monuments, objects and spaces that symbolise those qualities absent from the everyday lives of residents, which are nonetheless valued in their absence above all else, that allow for a continuation, in fact for a continuous reinvigoration of the shared illusion in which we as citizens, and our metropolis, embody those very notions –strength, justice, liberty, faith, beauty, wisdom, excitement- whose realisation is otherwise so conspicuously absent.

Significant objects at home, weighty monuments in avenues, and civic buildings around plazas allow us to keep living through the grinding, dysfunctional banality of city life by providing us with daily, concrete, incontrovertible proof that we are, and our city, is so much more than just the sum of its parts.

They are fragments of a dream we all wish to keep dreaming.


“’Well, do you appreciate that there are bound to be as many types of human being as there are of political systems?’ I asked. ‘Or do you imagine that political systems somehow come into being from oak or from rock, rather than from the characters of the communities’ inhabitants?”

Begun by a pope as an appropriately giant residence for his family, and designed with a vast convex façade by Bernini, the palazzo Montecitorio was a banquet of stone too big for the stomach of the Ludovisis, and was abandoned, unfinished for thirty years, with its baroque front left as lonely caretaker to a field of future rooms marked in the Roman mud by low walls of rubble and weeds.


Completed as Law Courts to amended designs sprinkled with ornamental flourishes by Fontana, its immense bulk slowly accumulated uses, found its purpose through the incorporation of offices and functions over the proceeding centuries until it housed the Papal State’s judges, the city’s administration, its governor, and the headquarters of police, eventually making it the de facto centre of all administrative, judicial and law enforcement in the city.

In the public mind however it was the central balcony in Bernini’s façade that captured the imagination, with the winning numbers of the national lottery being announced from its balustrades nine times a year, to covetous and adoring crowds, atomised by their individual hopes of a solitary, and spectacular win. 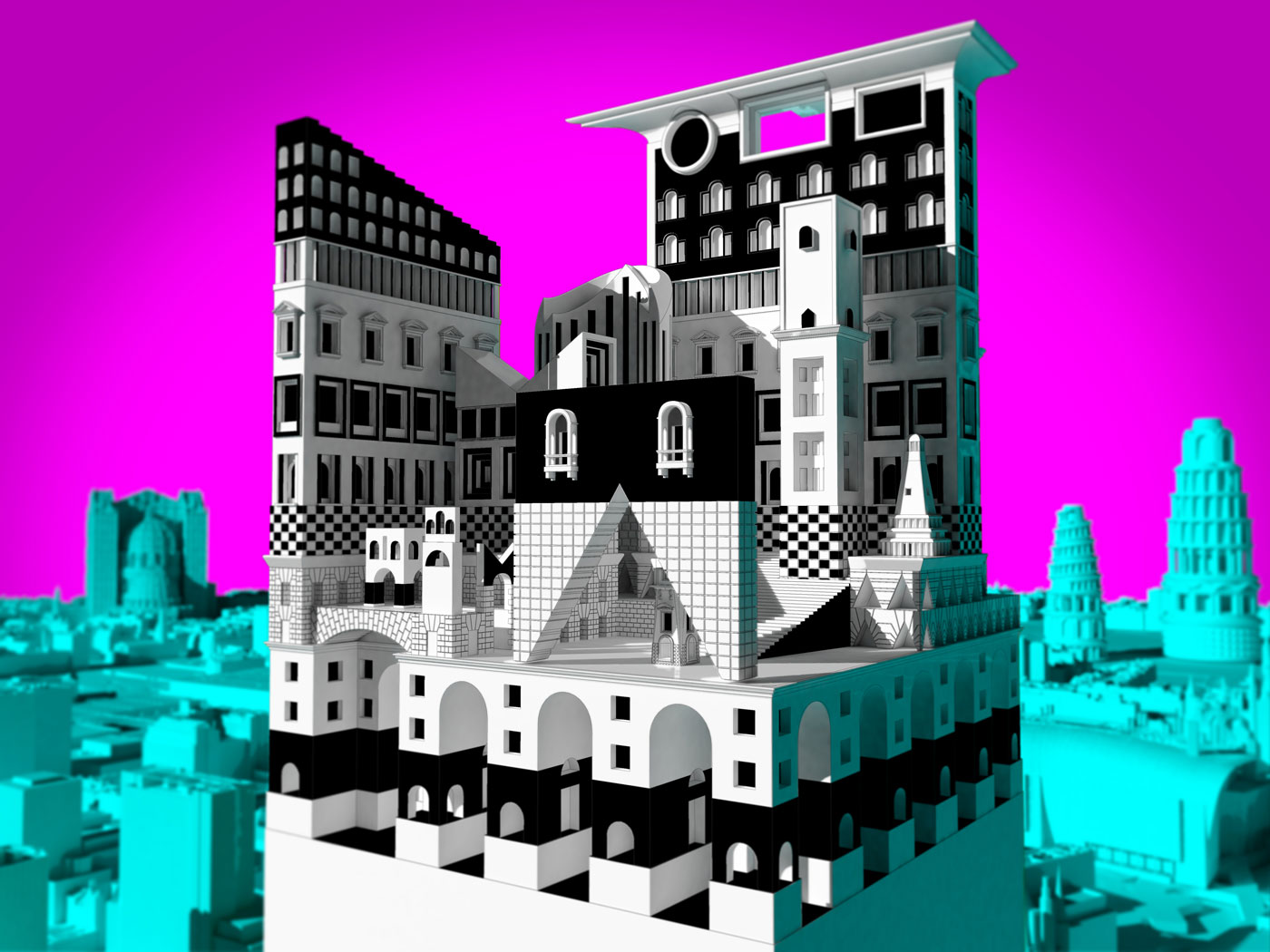 
"everything needs to change, so everything can stay the same"

Upon the assumption of Rome as the capital of a new nation, this baroque shell of bureaucratic departments, with its endless rooms and façade of felicitous association, became a House of Parliament, its piazza-sized semi-circular courtyard filled with the Chamber of Deputies, a temporary accommodation that was soon unfit for its role as the heart of a country with imperial aspirations.


An even bigger palace was built, really a parliament, in the most elegant style of the times by Basile, with interiors resplendent with acres of oak panelling, marble floors and floating glass ceilings, a giant new complex, but one still called the Palazzo Montecittorio, with Bernini’s façade maintained intact, now host to the proclamations of a parliament instead of the spectacles of a papacy. The explicit body-snatching of an architectural form imbued with centuries of political legitimacy by a new sovereign, from its immediate predecessor.

It has been host now for over a hundred years to the contentious ecosystem of Italian politics, its piazza and façade accommodating an endless sequence of demonstrations and counter demonstrations, television interviews and parliamentary walk-outs, its epic bulk crammed into the heart of the ancient city. Montecitorio, with its accumulation of historical significations, a figure of rootedness and burgeoning modernity, rammed up against the remnants of the city’s bustling past, is only one site of active symbolic resonance out of many competing with one another in the city. 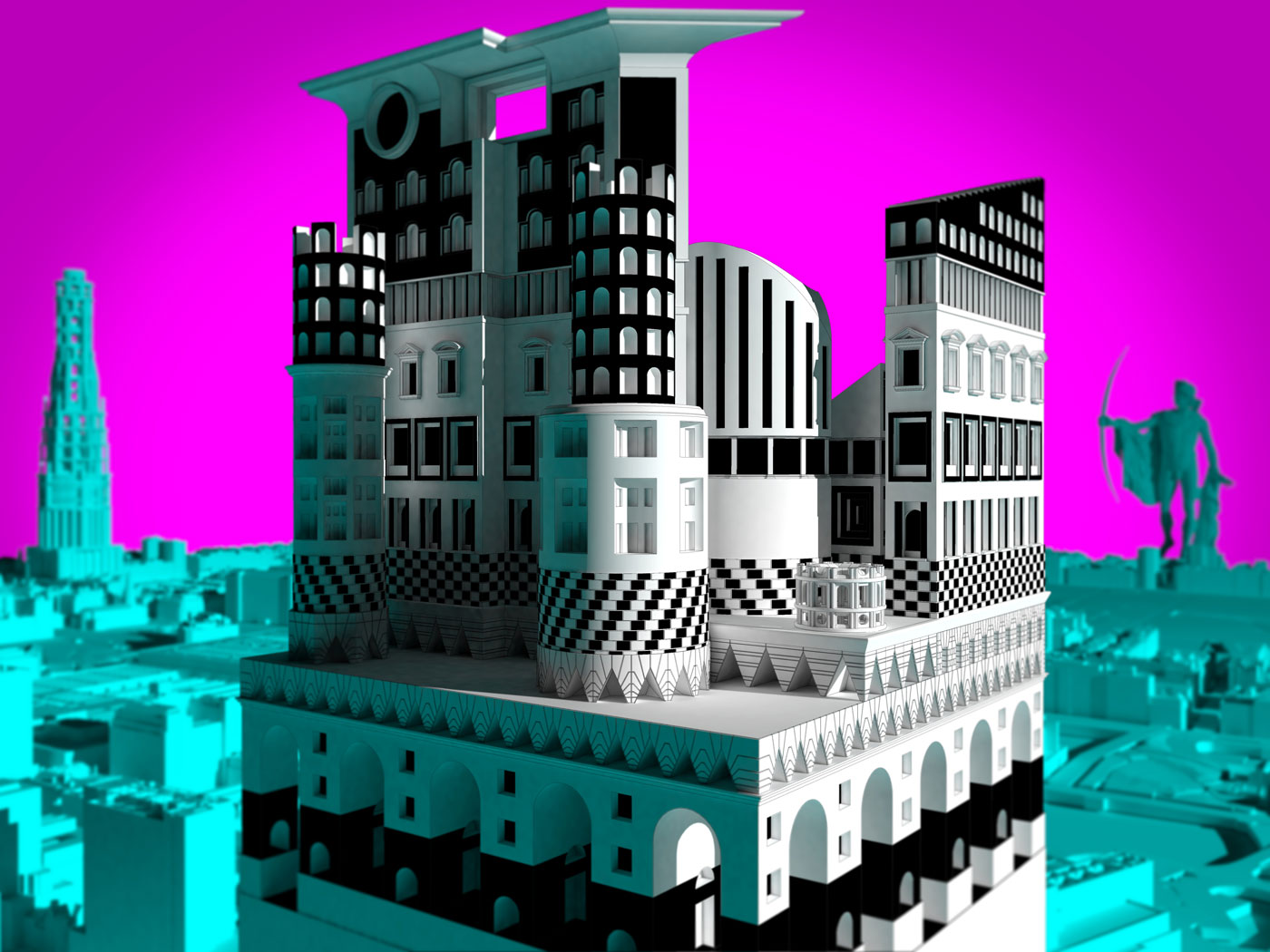 “Rome was a poem pressed into service as a city.”

St Peter’s, the Vittoriano, the Quirinale, the Colosseum, St John the Lateran, palazzo Madama, the Palazzacio, the Campidoglio, the Foro Mussolini, Pantheon, Corviale, there is an abundant surfeit of symbols in Rome. A collection of buildings, monuments and spaces that embody and project the jostling, and often entirely contradictory assemblage of world views, ideas of nationhood, belief, art, politics and history that somehow simultaneously coexist within the physical confines of the Grande Raccordo Anulare.

The profane performance of Rome as a functioning city could be told solely as an abysmal story of corruption and mismanagement, transport chaos and unplanned development, bureaucratic inertia and teeming decay. It is however precisely the discrepancy, the awesomely unbridgeable gulf, between the day to day failures of the city as an efficient site of normal existence, and the innumerable, vast, proclamatory symbols that anchor every other street in strident evocations of an idea of itself far greater than any actually realised in the fabric of the modern city, that generates the fuel which keeps Rome enveloped in a thousand-year long, ever-accelerating dream of itself.

The day-to-day sclerosis of its overcrowded underground, traffic-clogged motorways, and abandoned bike-shares act simply as an irritant that drives the imagination headlong into the enveloping notion of another Rome. Another, ideal city, the fragments of which can be found wherever you care to look, and which act as archaeological proof for your doubting intellect, as concrete affirmation of the reality that begins to take over through the alluring images in your mind’s eye. 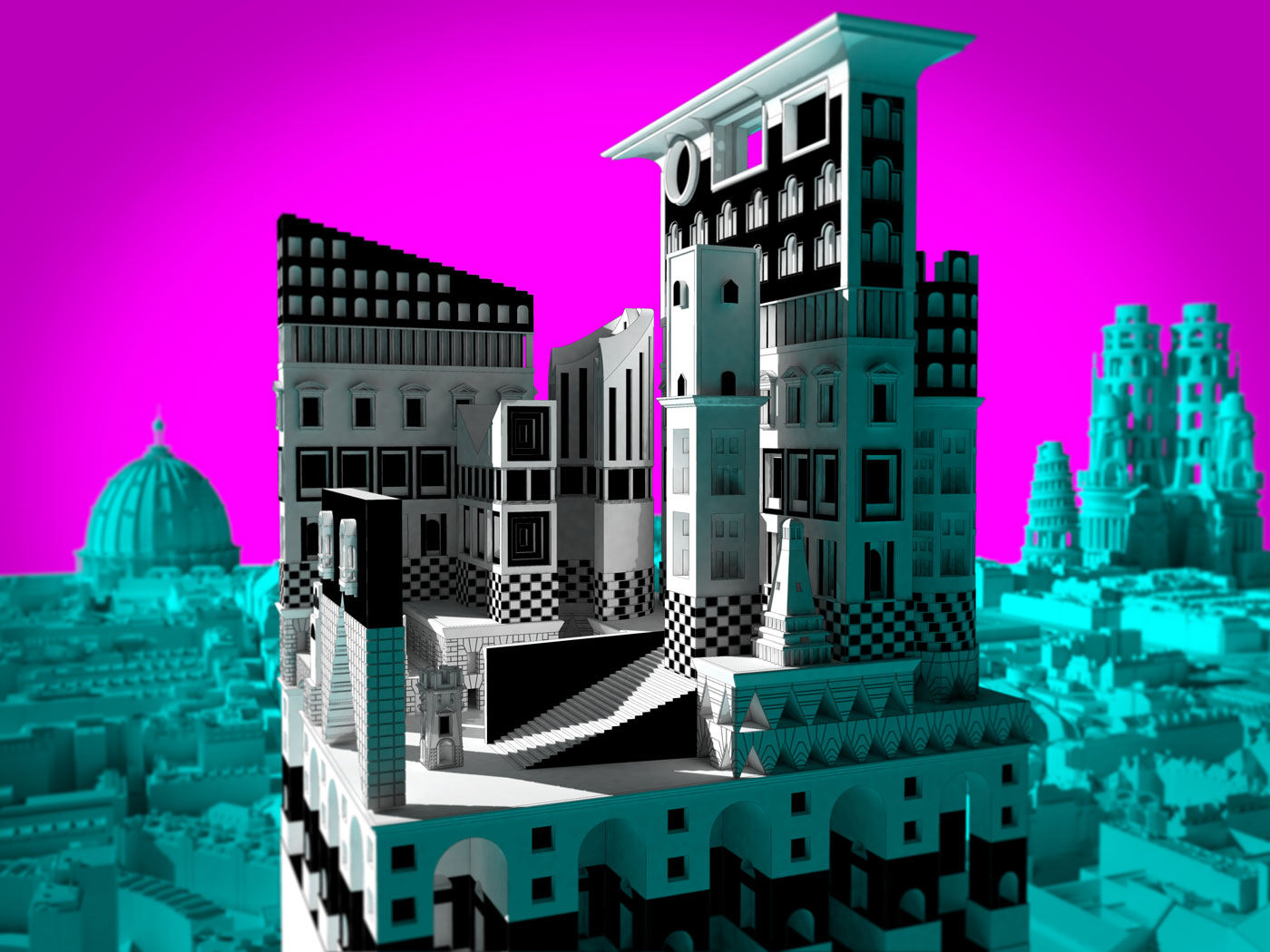 “The catalogue of forms is endless: until every shape has found its city, new cities will continue to born. When the forms exhaust their variety and come apart, the end of cities begins.”

Every façade is an evocation of a city as it would be imagined by one period, or one institution, or one church, or one group of people, or even one person. In their proliferation these visions of Rome are like the medieval towers which used to crowd the air in Tuscan towns, jostling with one another to form a parallel skyline of ideas, a forest of how it could be, or perhaps was, or how it actually is when looked at in a particular way.


As a visitor you will almost certainly find yourself climbing one or more of the towers, ascending step by step to the rarefied collection of domes atop Catholic Rome, or rise slowly up to the picturesque ruination of vertiginously piled brick vaults, and broken marble entablatures that crown the imperial idea of the city, or you’ll walk up and up the square Colosseum, extruded up with steps echoing in the travertine stairwell to a lofty platform filled with Mussolini’s favourite buildings, a collection of white horizontals, curved balconies, marble columns and travertine arcades.


To ascend others you will need to knock on doors, ask questions, meet those who hold the keys. Most of them are inaccessible as their owners have long passed away, but talking to a Barista, to a lady at the Post Office, to an office worker in a government ministry or a researcher in the University, you will find yourself warmly invited up to plenty of viewpoints. You’ll be walked up hidden stairs, and whisked up unexpected lifts to see how these elevated Romes each have an acropolis, which is a living room, and a city square, and a capitol, in which all that embodies the sides of the city someone loves the most, have been tenderly arranged atop their own vertiginous plinth.


If you just can’t stay away, if your first visit to the city just isn’t enough, and you find yourself returning again and again, or as I have found myself -coming to live here for some time- you will not be able to help but begin building your own lofty version of the city. As instinctively as you would furnish an empty apartment in which you intend to spend the rest of your days, you will find yourself collecting material from around Rome, organising it, and assembling it into an edifice of individual experience, your own towering distillation of urban complexity.

When you eventually leave, what you have erected will remain. It will take its place among countless others in the crowded daydream which constitutes the skyline of this city, this capital of dreams that is suspended within the imagination of the world.
Posted by Adam Nathaniel Furman at 02:51