All Colours Lead to Rome 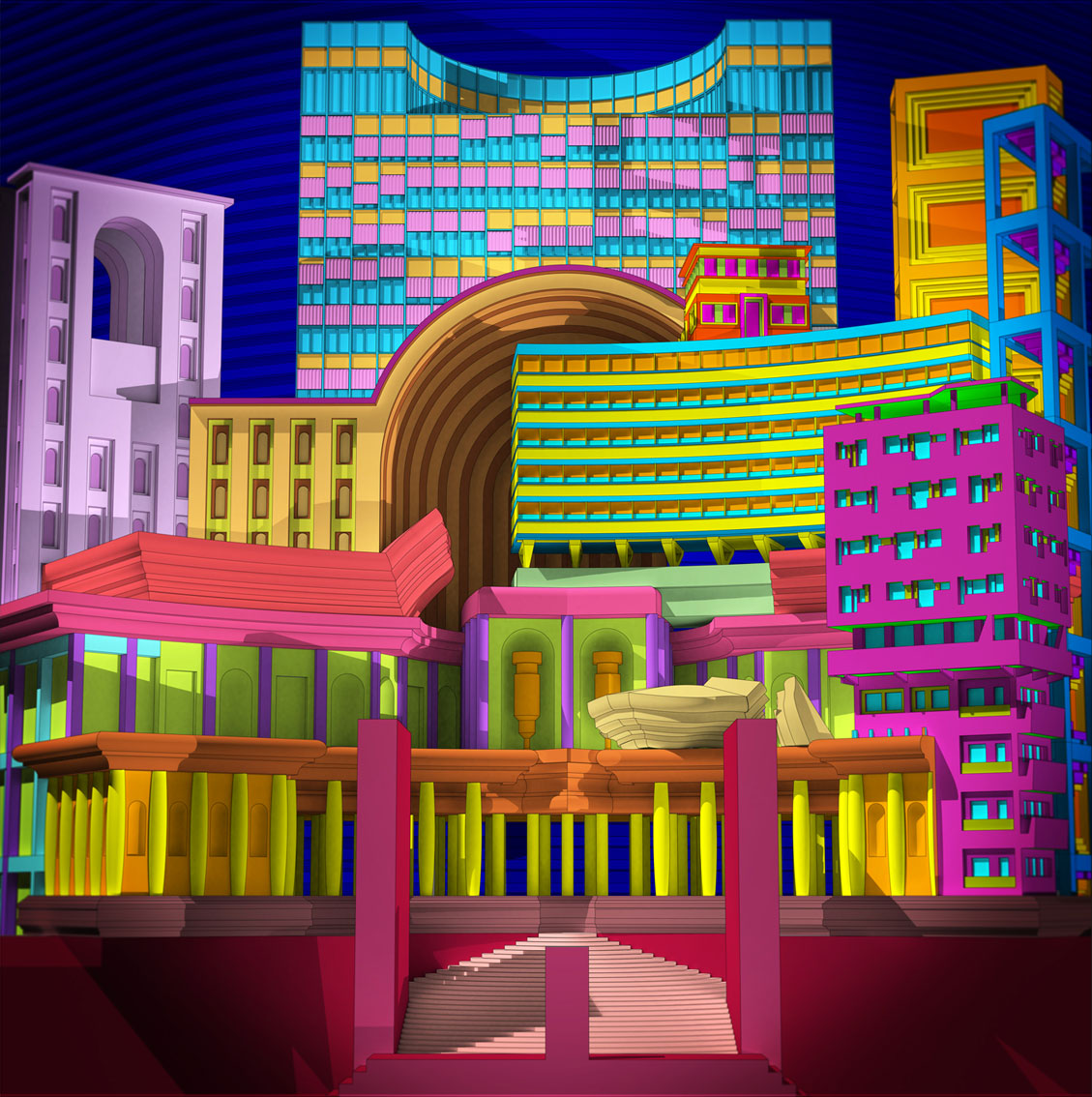 ^When Niccolò met Gianni and Pierluigi, and Ugo, and Pietro.

“Pompeian red: you are taken to a roman villa where lying men dressed in white peplum are served by young Egyptian slaves elaborate dishes, animals stuffed with animals stuffed with other animals, from the big ones to the small ones, and there is marble on the floor, outside the Mediterranean is blue but the walls of the room are red. That is all you see in a fraction when you hear Pompeian red.”
Nathalie Du Pasquier, Associations

Early Rome was a terracotta vase made from Red Ochre clay, like the Latin soil, like the walls of its buildings, like the background of its frescoes, with Yellow Ochre and Green Celadonite filling out squares and circles and any number of patterns, straight from the mud of the Lazian rivers and into the decorative schemes of ornamental objects, interiors, art. Figures were defined by black lines whose marks were made by the charred reductions of peripheral farmyard detritus, animal bones and discarded vegetation, not the accumulation of every other colour but the burning away of all life, a black nothingness for the depiction of anything. Egyptian blue glaze was like the eye of a northerner, or the sky at dusk, but boiled in a vat like a broth of minerals.

Rome came from red, and to red it will return.

"a world of statues that was reminiscent not of a trip to the British Museum today but rather of a colourful, interactive, hands‐on visit to Madame Tussauds."
Professor Mark Bradley, Colour and Meaning in the Ancient World

Numidian Yellow marbles, yellow Pavonazzetto from Phrygia, green Cipollino from Greece, purple Porphyry, pink granite, black basalt, Alabastro from Carthage, creamy Travertine from Tivoli, red veined Cottanello from Sabina. The buildings of the Forums in Rome were dazzlingly decked-out in multi-coloured marbles from the farthest reaches of the empire, just as much as its cosmopolitan crowd were dressed in every exotic attire that might be worn in any of the myriad nations whose lands laboured under the wealthy warmth of the imperial sun. 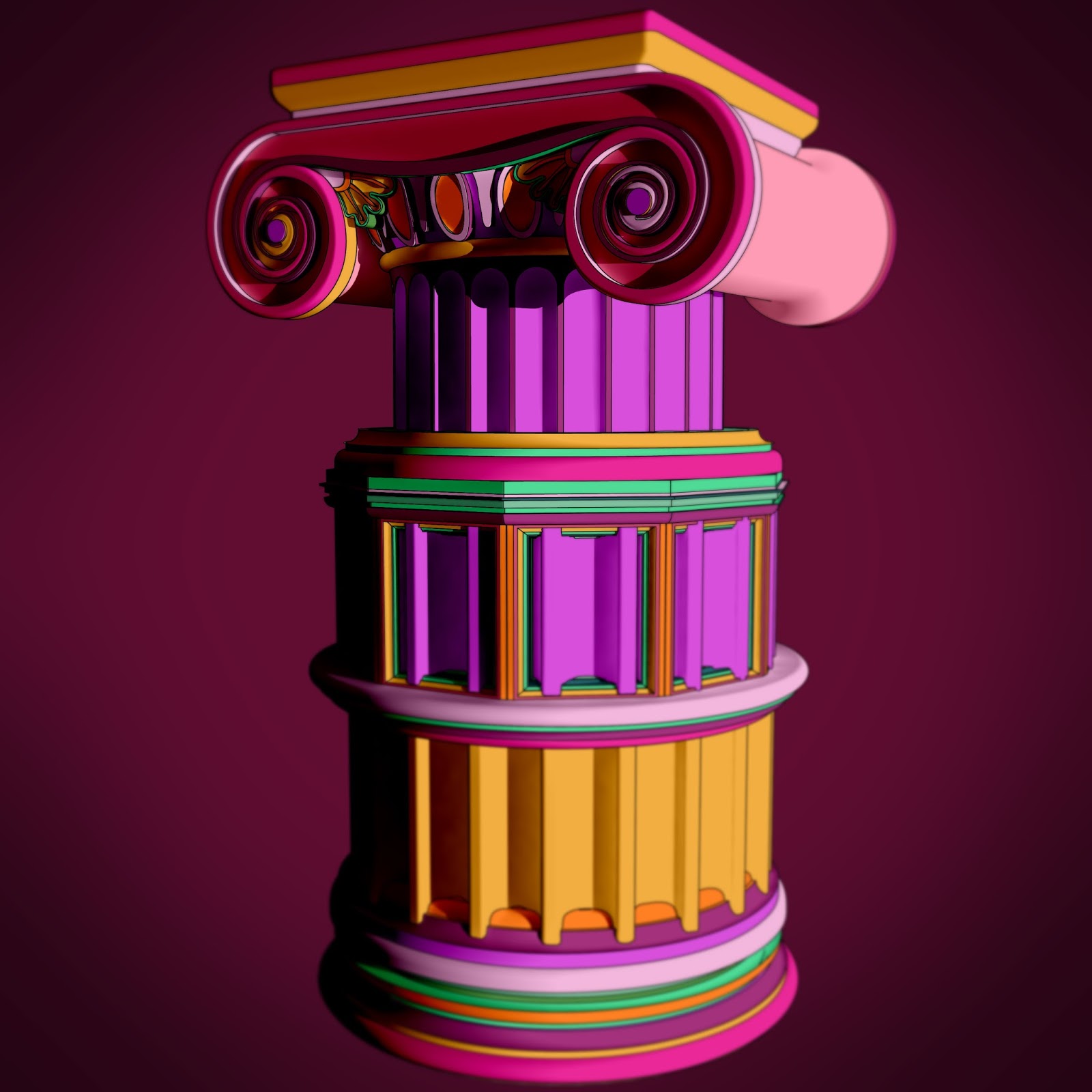 “For colour is the material in , or rather of, painting, the irreducible component of representation that escapes the hegemony of language, the pure expressivity of a silent visibility that constitutes the image as such”
Jacqueline Lichtenstein, The Eloquence of Color: Rhetoric and Painting in the French Classical Age, P.4.

Vermilion, Ultramarine, Azurite, and Verdigris mixed into the brightest of bright pinks, pale blues, opalescent greens, limpid purples and bulbous reds that spread across acres and acres and acres of walls, ceilings, and canvases in palaces, churches, apartments, villas and monasteries across the city. Popes saw themselves as emperors and St Sebastian became the focus of a gaze not quite in line with what might have been considered that of a pious Christian’s. Michelangelo terminated the Sistine chapel in an awesome cascade of writhing nude figures, pinned to the blue plaster surface of the wall like a squirming taxonomy of artistic ingenuity. Raphael built a villa for a Cardinal that was to have rivalled the palace of Nero in its devotion to the senses and saturation by chromatic display.

‘According to Hebrew tradition, man’s first name, Adam, stands for “red” and “living”.’
Manlio Brusatin, The History of Colours

An indolently naked Adam reached out to a purply-red man-God in a twisting bed of golden figures, and as their fingers touched the renaissance burst like a firework across the drab spectacle of medieval Europe.

“…savage nations, uneducated people, and children have a great predilection for vivid colours; that animals are excited to rage by certain colours; that people of refinement avoid vivid colours in their dress and the objects that are about them, and seem inclined to banish them altogether from their presence.”
Johann Wolfgang von Goethe, Theory of Colours, trans. C. L. Eastlake, p. 55. (qtd. in Batchelor, David Chromophobia)

A whitewash descending over half of Europe. A darkness consisting of the brightest pigment. The renunciation of idolatry, the elevation of text, the installation of a suspicion that the power of pigment is too much for the unwitting worshipper whose autonomy is superseded by dumb awe. No more ceilings like the sky at night or the heavens in your most voluptuous dreams. No more saints in the grip of other-worldly ecstasy or rooms whose walls were gardens that between them contained green shoots from which grew carnal pleasures in abundance. The North paled.

“In Egypt colors were considered to be signs indicating the “essence of things and not their appearance,” as witnessed by the Egyptian word for “Color,” which also meant “to be”. According to this thought colors had been separated from the divine body at the time of Creation and had been assigned to every population, to every animal, plant or mineral, to distinguish their peculiarities”
Lia Luzzato & Renata Pompas, Il Significato dei Colori nelle Civilta’ Antiche

Rome blushed, and carried on, only more so. A deep, rich, red, ornate proliferation of giant columns and stormy skies at sunset. The counter reformation saw a redoubling of the power of pigment and the exaltation of art. You no longer had to stand in front of a painting, they had grown so big that the whole building was now inside the depiction, the street outside, the entire city was a swirling vortex of putti, saints, martyrs, pediments, colonnades, chapels and staircases, rising up to a Catholic Trinity at the centre of which rested the golden poise of an all-consuming St Peter’s. A Roman riposte in marble and oil. 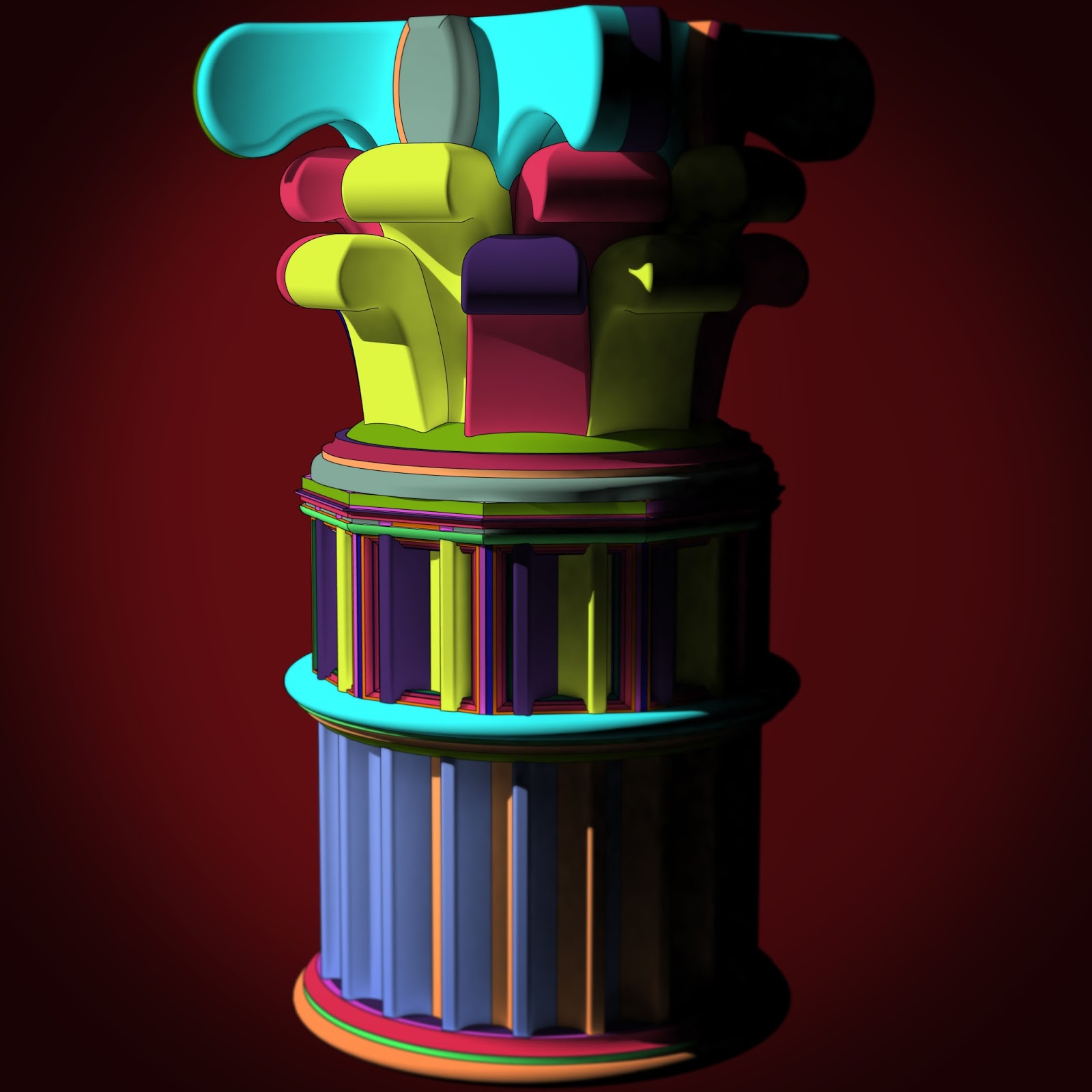 "As white is the colour which reflects the greatest number of rays of light, and consequently is the most easily perceived, a beautiful body will, accordingly, be the more beautiful the whiter it is."
Johann Joachim Winckelmann, The History of Ancient Art.

A whitewash of limpid young men in Carrara marble, Hellenic profiles standing one after another in the rustling gardens of aristocratic villas, inviting contemplation, implying a perfect and pure form of permanent youthfulness. Athletic affirmations of unattainable ideals, the bleached boys embodied an eroticism of elevated desires. Passions that were once hidden now openly minced down shady paths, loftily appreciating the pure white buttocks of ancient Apollos, Antinuous’, emperors, athletes, soldiers…

In the bedroom moving flesh tones and the undulating shadows of clean sheets, set against unadorned stucco work wrought with the classical rigidity of the most upstanding scholarship.

Winckelmann worshipped whiteness as a veil behind which he could hide all the shades of his prohibited pleasures. 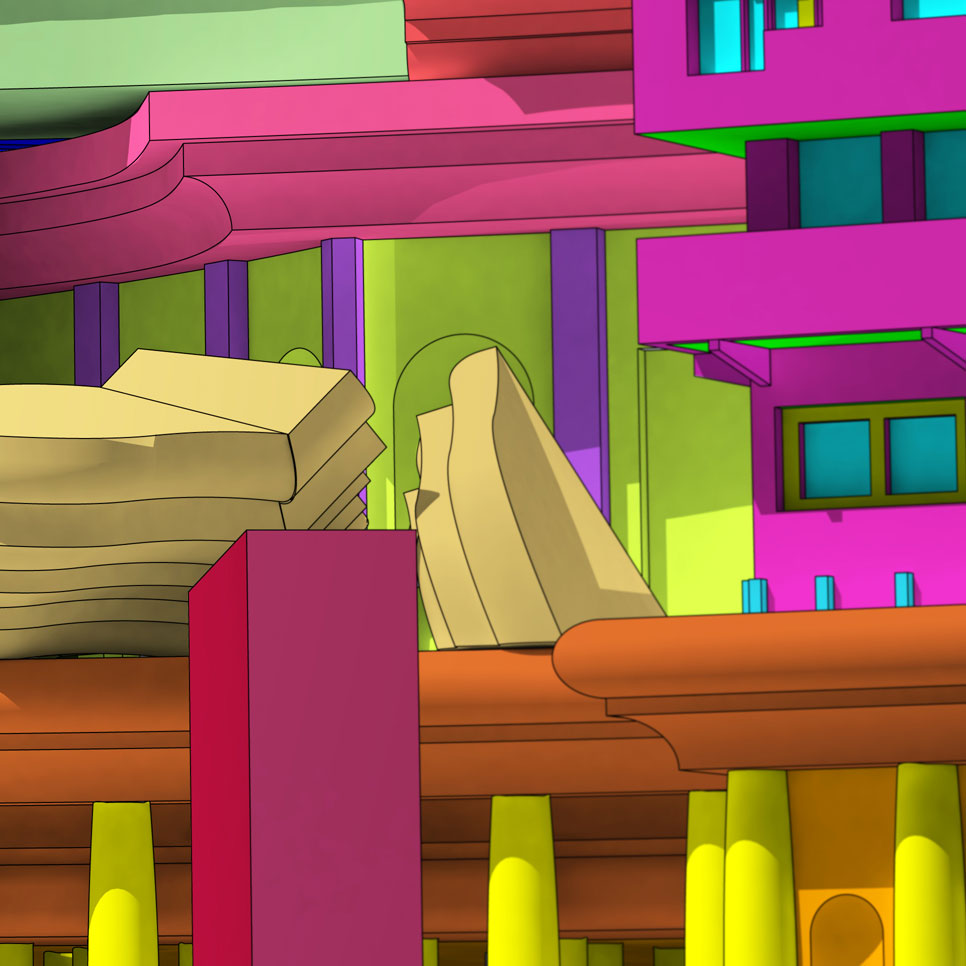 ^When Niccolò met Gianni and Pierluigi, and Ugo, and Pietro. Detail

“We will sing of the great crowds agitated by work, pleasure and revolt; the multi-coloured and polyphonic surf of revolutions in modern capitals”
F.T. Marinetti, The Futurist Manifesto

The bourgeois march of a Rome bleeding with notaries, accountants and bureaucrats, stuffed with parliamentarians and insurance companies. Its buildings staid as the waiting rooms of family lawyers, coloured like the backs of filing cabinets, they filled the gardens and the parks and the pathways and the fields. Fords and Fiats thundered across Piazza Navona, and trains pumped in and out of the railway stations squeezing more and more people in between the facades, until there were so many apartments and crowds and cars and trams and buses and museums and offices, that the Futurist’s explosive whorls of electric energy were like being on the Via Nazionale and catching a glimpse of the whole city collapsing as it slid past on the curving chrome bonnet of a passing bus.

"[colour] works as an enzyme to catalyse chemical reactions, it generates nervous impulses that open new doors of logic in the brain, it is a sort of perceptive jogging, an aerobics for lazy or drowsy sensory cells. Like jogging it requires commitment, determination, measure, enthusiasm, faith, and patience, and to serve a purpose, it must be used well."
Barbara Radice, Memphis: Research, Experiences, Results, Failures and Successes of new design

The polychromy of the Renaissance returns like flowers growing through rubble left by the war. Televisions pulsating with coloured light. Piaggios buzzing about the place like tropical parrots. A florescent green Granita in a shiny translucent cup glinting in the sun on an Ostian beach. The rose curves of a Cadillac’s wings, the beaming orange of fizzy sodas, the pacific blue of the banquette seating in new restaurants. The city effloresces in pink and purple and yellow elevations that look like stacks of products on the shelves of neon-lit supermarkets. Shiny, loud, cheap, vibrant, plastic, mass-produced, new new new. Banana yellow Fiat 500s driven by women in loose, red cotton blouses. Balconies that zig zag, and curve in and out like Bernini designed them for a 1950s fashion house, and all covered in as many mosaics, ceramics and colourful make-up as you might find in the bathrooms and dressing tables and kitchens that they surrounded. 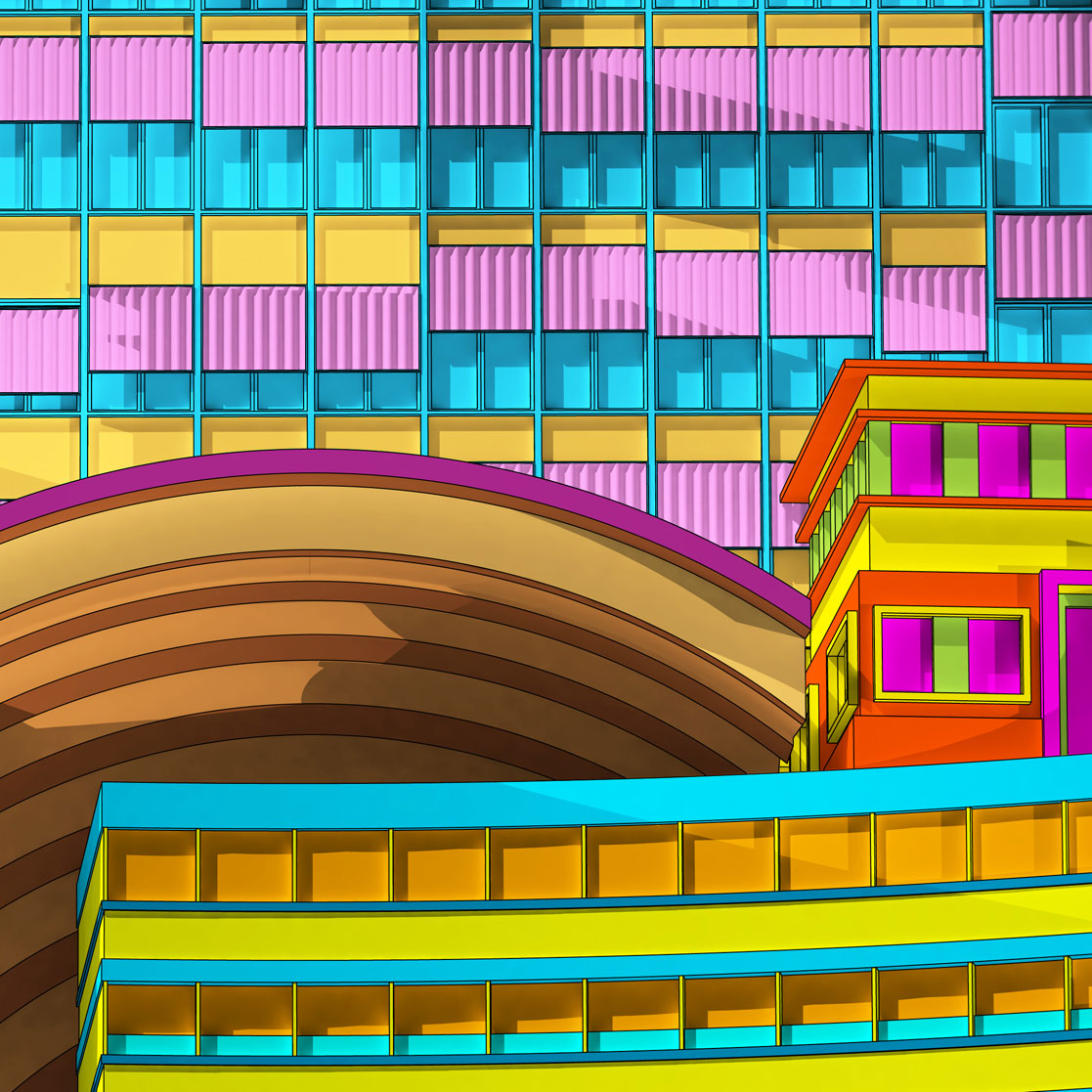 ^When Niccolò met Gianni and Pierluigi, and Ugo, and Pietro. Detail

“If I think of spaces being saturated with colour, or just information, the space that comes to mind is the screens through which we access our internet.”
Andreas Angelidakis, The Colour of The Internet

The city’s new museum for the new art of the new century is steely grey, with squiggly highlights of black, its massive curving pipe-forms looking like they’re straining with all their tectonic might to return to the nineties, when grey was the universal soup of a triumphant but somewhat bored globalisation that just mixed everything together until it was all, well -grey. The young mothers take pictures of it on their phones, and as they post it to Instagram they add a filter, sepia or cool, or faded or greenish, they blur it, rotate it, up the contrast and increase its saturation, ripping it out of its textureless, colourless reality and blowing it apart so that it can float away on the breeze like confetti.

If you look up you’ll see them tumbling, and flowing in eddies together with the pieces of everything else that has been digitally detonated into a million glistening fragments, and just as the sun sets, when the swarming cloud is at its most luminous, you can glimpse shapes as it dives over the city, faces, buildings, neighbourhoods, histories, colours, the billion moments that have built Rome. 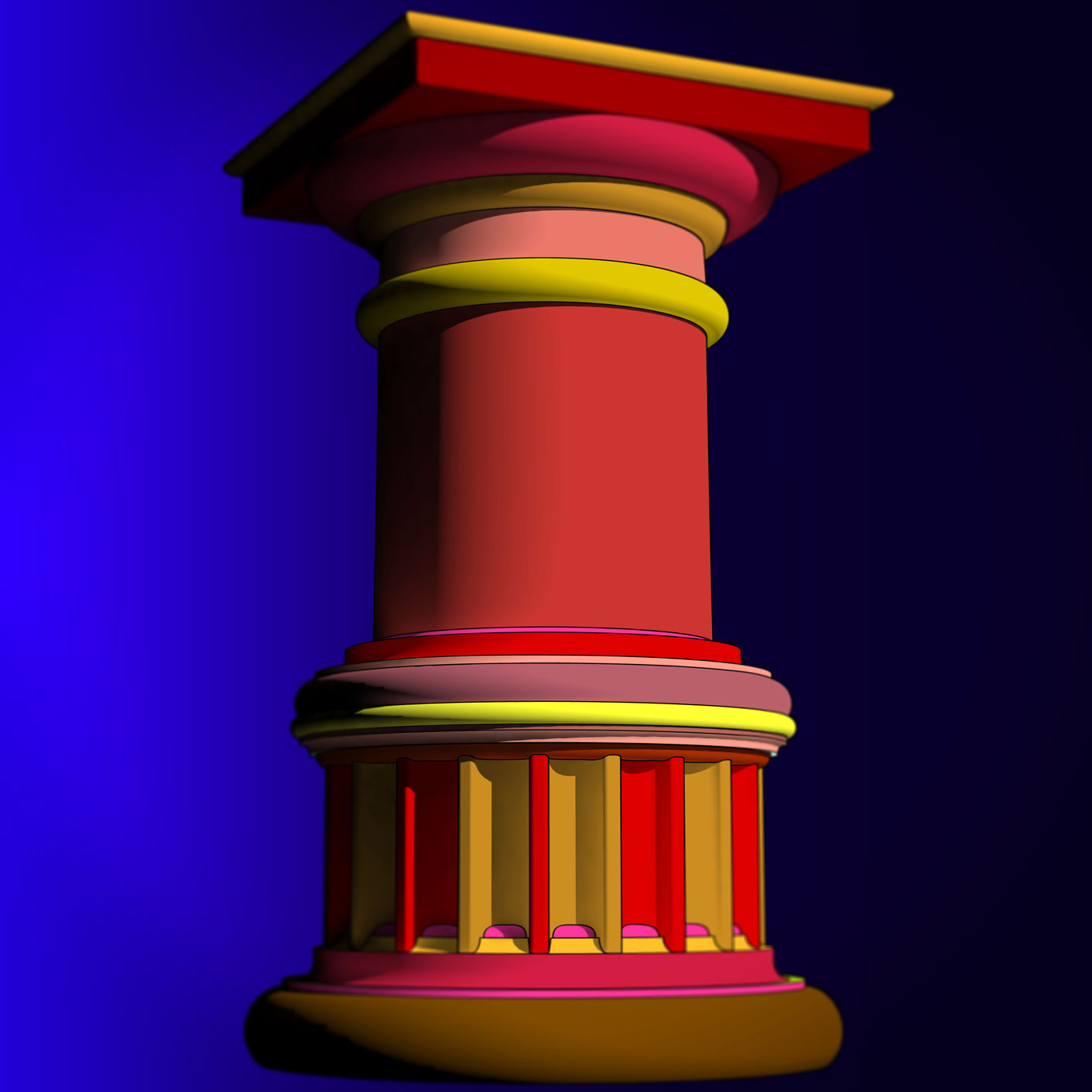 Posted by Adam Nathaniel Furman at 09:24